More nice scenery in the avon valley, first up there was a need of water to replenish the tank.

Just after the swing bridge a water point was shown, we nearly missed it as it was just a concrete built cupboard, I reversed back and moored up but we were defeated you needed a special key to access the cupboard we didn’t have one!

So back aboard we head on knowing there should be another chance at Bathampton. After another tick over mile or so (moored boats) we arrive at Bathhampton and find the tap and get our tank back to full. A good flow on it not as slow as others I have read about.

Not sure why Janey has her Gillette on was lovely day.

Then onwards to Bath.

Janey on the tiller

Nudged my 1st boat going for the gap to a moored boat between it and an approaching boat, ahh not happy about that, should of waited!

That was not it though approaching Darlington Wharf with solid moored boats I encountered a widebeam around a blind corner he was well over his side me not so! I got across ok and avoided the widebeam well, but forgetting how a narrowboat spins on it’s centre rather than back following front I nudged another boat by putting the tiller right to bring the bow left after getting through, I needed to wait a touch longer!

Still it was very minor nobody noticed but me. Then on through Beckfords Tunnel, Sydney Gardens and Cleveland House Tunnel quite surreal after cycling through here many times. 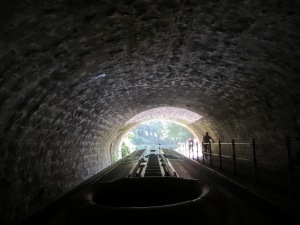 Wonderful stuff cruising through Bath, then arriving along the pound to Bath top lock there were boats everywhere and a ABC boat was reversing out of the lock. When he got level the steersman advised “Do you know the bottom lock is closed ?” well actually I did but the CRT stoppage notice I had seen online said stoppage until 12 noon. So after a chat as they were heading for the water point I learned there could be a possible lift of the closure at 16.00hrs. Well I noted I could get out 48 footer around at the top lock which with some use of the pole in the bow by Janey and Karen we did. Others had to drop 2 locks wind in the side pound and back up. We found a mooring on rings just along from bridge 188 and decided to stay put and move on in the morning.

So that gave the opportunity to spend the afternoon grabbing retail therapy in town.

Rather surreal as we would do this maybe 4 or 5 times a year anyway but by car from home 35 minutes drive!  We had tea in The Slug & Lettuce top of Milsom Street a sort of Witherspoons really but all good no complaints. We noted on the way back to the boat the area for eating out looks to be the new environs around Bath Spa Station. We walked back up through the locks around 18.00hrs and noted the bottom lock still chained.

The mooring was fine and no disturbance through the night.

Beckfords Tunnel out into Sydney Gardens.

Out from Cleveland House Tunnel

Tyres opposite the winding hole at Sydney Wharf.

2 thoughts on “Claverton to Bath”