Well we had to return and vacate nb Ena by 09.30 to Frome Road Wharf. It was just a short hop up through Bradford Lock.

We rose rather early and had breakfast etc. no hoover on board unlike other hire boats it was out with broom and dustpan and brush. No mop on board either so cleaning cloths and water got the worst of the foot prints off outside the boat.

Karen and Jack made the inside sparkle and we headed off up through the lock, we had a “good road” as old parlance would have put it being an empty lock. So karen and jack opened up the gate and I headed in. It was taking an age to fill and then after a bit the chap of the yard shouted across the lower end paddle was not quite down, quite a problem he said the last bit is real stiff they have painted a white line on the paddle shaft (is that the right term) and another on the gate so they can tell from a way off if any boaters have failed where we did, as we didn’t touch the lower gates save from opening and closing a gate we had no reason to doubt the paddles were down as they appeared to be. Anyhow now we knew and soon the levels equalised and we were on our way for the last 200 yards.

I steered the bow into the wharf side (gently) and winded the boat around its pinned bow to face stern in, i.e. The opposite way to the way we came up out the lock. We were 2 nd boat in as another family  had spent their last night on the wharf.

So while we emptied the boat to the car our friends on the other BP boat we moored with in Bath turned up. The yard hand had nearly finished refilling the 1st boat with diesel then did ours, then the 3rd returners. So we had to wait for all this before we could leave I asked if they wanted to inspect the boat but the yard hand declined saying “I’m sure it will be fine” I would sooner they checked.

Then our 3rd boat man and myself were ready to settle the fuel charge, expecting about a pound a litre. Canalside and the fuel boat from the boatyard we’re about 0.85p a litre, but oh no they wanted filling station rates £1.35! A litre I think it was. We protested as they don’t pay the tax but were charging for it but the poor guy doesn’t set the rate it comes from HQ so we ended up paying the cost. To be honest we bargained on £90.00 so our £67.00 was actually all in budget.

So our fab canal holiday the 1st in 28 years had come to an end.

It really was amazing we really did enjoy it and it was the bestest 50th Birthday present I could of had! Great sunny weather lovely scenery and pub dining and with my No. 1 family perfick.

See the White mark on the paddle shaft

All that remained was to drop Jack back to his car at Claverton and say goodbye finally to the K&A for this holiday.

So with the holiday being a great success we or should I say I are looking forward to the next one.

Coiled the ropes and we were away at 09.06 as we had a cycle race to catch! The Tour of Britain Stage Six came to Bath then enroute to Hemel Hempstead it crossed the K&A at Winsley Hill

So we headed off and soon arrived at Dundas where at the foot bridge Karen jumped off to dispose of the rubbish at the wharf, Jack and I continued to moor by the lift bridge for the Somerset Coal Canal.

Picking up Karen on we went across the magnificent Dundas Aqueduct and on into Conkwell Wood before mooring up just shy off Limpley Stoke Road Bridge No. 175 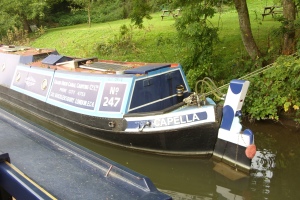 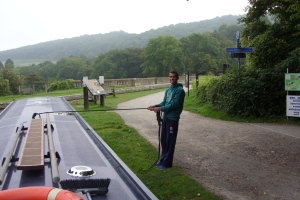 So we arrived in plenty of time walked up onto the hill a small way beyond the bridge. Being cycle race fans and multi Tour of Britain visitors we knew what to expect.

1st you get the sponsors vehicles coming through some handing out free bees.

3rd the police escort this is always fun as they move at a rate leapfrogging the race to keep the rolling road closure going.

Then we get to see the race proper even uphill the riders pass very quick, but we spotted the stars.

Followed up by the team support cars. 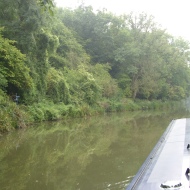 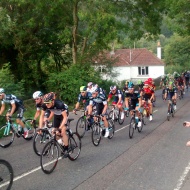 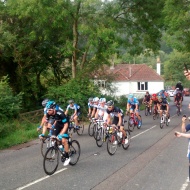 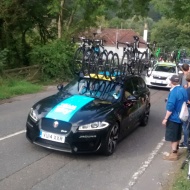 So back to the boat and coiled the ropes and on to our Over night mooring Bradford-on-Avon. 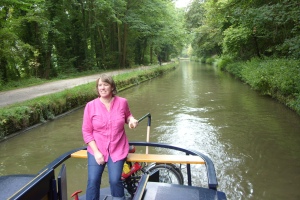 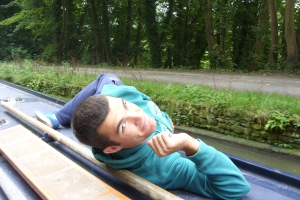 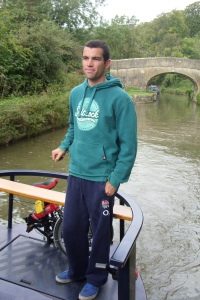 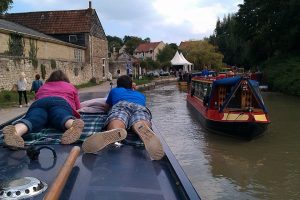 Relaxing on arrival at B-o-A

So Thursday dawned and we had breakfast and walked up to wave off Rob and Janey they are heading off to Falmouth to Robs Graduation. Was not long after returning to Ena that we coiled the ropes and were off at 09.47. Karen walked on up and set lock 11. Soon I was in and gates shut, I climbed the lock ladder for the 1st time on this holiday to assist Karen with operating the lock. Karen was a little apprehensive about doing the 3 locks unassisted but she was fine and took it all in her stride. It was an easy passage and we had a few gongoozlers on Bath Top Lock 13 and by 10.25 were through and on our way.

The weather still lovely we made our way to Bathampton to the water point to fill the tank. Soon done and on our way. Lovely cruising weather plenty of moored boats around here but we have plenty of time. Next along was a couple of fine looking boats 2nd being a traditional pair motor and butty.

We slowly made our way to Claverton to moor up for the day. 12.20 ropes were tied up and time for a relaxing afternoon .

Had another wander down to the weir and pump house in the late evening, I do like it here. I watched a farmer negotiate the unmanned level crossing He opened both gates then went across to call the signalman on the line side phone and returned to his tractor not long after a train came through, he still waited I wondered what was up then out of nowhere a 125 came flashing through! seen in the photo I guess he was told wait for two trains. He crossed and closed up the gates. Much later about 23.15 I popped out to meet Jacko who was joining us again for Friday and Saturday took the torch up to the road and met him a nice quite place there for him to park for 2 days.

I’ve been toying around with this blog and had various titles but now settled on this one.

“Ersanmyne” is a name steeped in family history.

It’s the name of Karens grandparents bungalow in the highest village on the Mendip hills Priddy also steeped in history.

So Grampy Payne who had the bungalow built in the 30s maybe 40s not sure, called it that and we love the name “Hers and Mine” is the translation in case you didn’t guess.

So if we ever have a narrowboat of our own that what she’s going to be named!

Since early 2014 I had harboured a passion for a narrowboat holiday.

I posted on Canalworld Forum a request for info. regarding best value deals.

A member posted a link to http://www.latelink.com/Areas/england.htm and that was a great result, after many months of keeping an eye the days came to try and get a deal (the longer you dare leave it the better deal you will get). I had a false start of a nigh on £1000.00 deal for a week 5 berth then a on Sunday a 4 berth Black Prince Deal came up bingo £749.00 deal ws secured and about a month before we set off.

Photos from my wanderings

An occasional record of railway activity and traditional music

Exploring the country on England's canals

The occasional adventures of the Cleddau crew

Exploring Europe on W B Avalon

Will Royal Wootton Bassett once again be linked with the sea by boat?

....life on the straight and narrow

The Travels of Narrowboat Lillyanne

Sailing, yachts, adventure and sailing around the world!

Family Life and other things.